Leeds 1 Tottenham 3. The FA cup dream is over.

Share All sharing options for: Leeds 1 Tottenham 3. The FA cup dream is over.

It had to happen at some point and on Wednesday night it did. 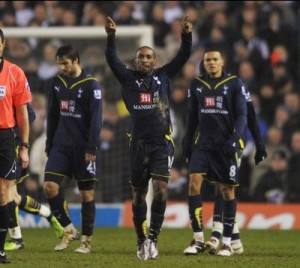 Leeds finally exited the FA cup in the fourth round replay against Spurs.

The Whites have had an amazing cup run going from beating Oldham and non league Kettering to humbling the Premiership champions at Old Trafford and holding Tottenham at White Hart Lane.

Not bad for a league one side.

But after their dramatic late heroics two weeks ago with the Jermaine Beckford penalty, Leeds finally succumbed to the premiership side at Elland Road.

Leeds held out until 37 minutes when Jermaine Defoe give Spurs the lead with a lucky knee shin foot volley type scuff into the top right hand corner (you watch it and try to explain what it was!). 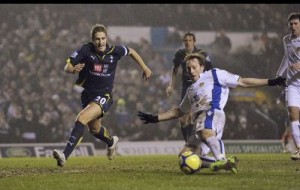 But Leeds, controversially, were level in injury in the first half when Luciano Becchio bundled home the rebound from Beckford's shot which was saved by Gomes.

He appeared to be offside, but 36,000 Leeds fans couldn't care less and the roof nearly came off Elland Road. Could another upset be on the cards?

Unfortunately not. As one Jermaine was relatively quiet in front of goal, another Jermaine was in fine form and had several chances to score and eventually did.

On 73 minutes Jermaine Defoe made it 2-1 when David Bentley played a low ball into the ball and Defoe finished calmly. 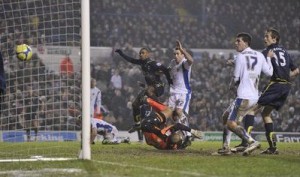 It seemed that that would be that. The brave Leeds side had done everything but the gulf in class was finally shining through.

Unfortunately for the visitors no-one told the League one side that it was over and like in every match they seem to play in this competition, they kept soldering on.

A succession of corners in the last 5 minutes suggested and equaliser and extra time could have been on the cards.

But after a free kick taken by the superb Casper Ankergren on the half way line was cleared, Jermaine Defoe raced onto it beating Michael Doyle who chased in vain and as the Danish keeper ran back towards his goal Defoe rounded him and slotted home for the hat trick. 3-1 game over.

But at full time the Leeds fans knew that what their side had achieved in the competition was second to none. Arguably their best performance in the cup for quite a while. And so all rose to their feet and sang Marching on Together to say thank you and well done to their heroes.

Once again we showed on national tv why Leeds need to be back in the premiership, the commentators said it, Steve Ryder at the end once again said it, the premiership needs Leeds back, with the fan base, the passion, the stadium, this club has it all. Compare us to Wigan. Need I say anymore.

We have gained many fans in the media and neutrals alike, something which many Leeds fans aren't used to. We're normally the most hated and probably among many we still are. But reading the newspapers and listening to the radio and hearing the praise this side has deservedly got is amazing.

Praise for our young talented manager, our young committed squad and most importantly our fans.

An unbelieveable effort. This cup run will always be remembered for one match. Old Trafford January 3rd 2010. Never to be forgotten.