It always promised to be a cracking West Yorkshire derby match and it was. 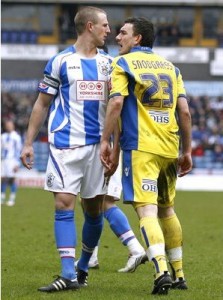 The Galpharm Stadium welcomed its biggest crowd of the season of just over 21,000 to welcome local rivals Leeds.

As many Leeds fans know, we have never done great against Huddersfield. We have failed to beat them since December 2007 when we picked up a comfortable 4-0 victory at Elland Road.

What this can be blamed on is unknown. It's thought that Huddersfield see it as a bigger match than us and they get up for it more. I don't buy into that. 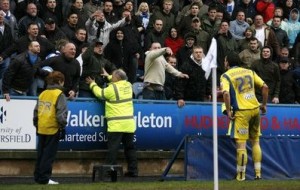 Both matches have attracted larger than average crowds and judging by the celebrations after each goal yesterday, it clearly gets into the hearts and minds of everyone involved.

Before the match Simon Grayson did make a good point though, even though it is a derby match, you don't get more points for winning this match than any other. It's still a league game and it's 3 points up for grabs. 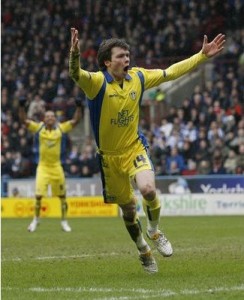 But with Huddersfield still the only unbeaten home team in the league, it was never going to be easy. Plus the Terriers were on a good run of form. I would've happily taken a point.

Even though the hosts were on top, it's always a cruel way to go behind. You couldn't help but think that it would be the start of a routine win for Huddersfield.

It was always going to be the case of could the Leeds players get up for the match now?

After recent matches where results haven't gone the way Leeds players would've wished, the fans would never forgive them if they didn't at least try and get something out of this particular match.

Huddersfield were on top for the whole of the first half, but the second half was all about Leeds. The response that was wanted.

The equaliser came on 61 minutes when a Robert Snodgrass cross found midfielder Jonny Howson who planted a header into the top left corner in front of 3,000 ecstatic Leeds fans.

And just minutes later they went into delirium when the in form Luciano Becchio had a close range header when Snodgrass' corner was flicked on by skipper Richard Naylor to the Argentinian at the far post where he couldn't miss. 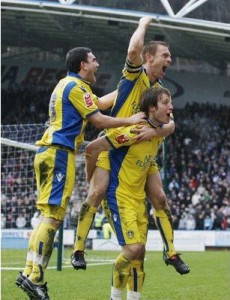 Leeds then were well on top and it looked like a first win at the Galpharm was on the cards. Unfortunately Lee Clark's men are known as perennial attackers, and score goals for fun.

This happened again when Gary Roberts side footed a cross from the right wing after being left unmarked at the far post.

5 minutes of injury time couldn't change the result and the spoils were shared.

Obviously a tinge of disappointment for Leeds fans and players because of being so close to winning it. But there were plenty of positives to take from the match.

Huddersfield are no slouches, 6th in the league and are a fine team especially at home. But Leeds went and battled all the way and even more impressively came from behind to take the lead, something perhaps we wouldn't have done a few weeks ago with our run of form.

We battled, we fought in a true West Yorkshire derby style and it's a point most Leeds fnas, realistically, would've taken before the game.

And with Colchester losing and Swindon drawing, it was a valuable point.

Norwich's win mean we are 5 points behind them with a game in hand, but even though we were in pole position and could have possibly lost the title, the important thing for me was always top 2, automatic promotion, the title is and added bonus. But we're still not out of that race yet.

It was a fine advert for League One football, an end to end free flowing match replicating the 2-2 draw at Elland Road earlier in the season.

Don't be suprised if the Championship welcomes 2 West Yorkshire clubs next season.