Leeds picked up only their second win of 2010 and did it comfortably last night. 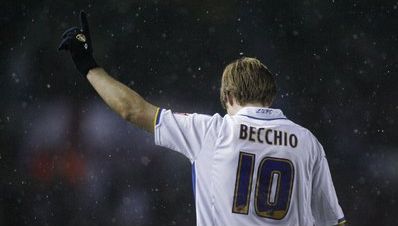 Two goals from Luciano Becchio in the second half gave the whites a comfortable 2-0 victory over struggling Oldham.

The build up to this game rightly focused on the slightly worrying form shown a side who were 10 points clear at the top of the table in December.

Leeds had only picked up 1 win in the league since December 30th before last night.

It was hoped that three home games in a row would start a revival, but after losing their 13 month unbeaten home record to mid tabled Walsall and barely scraping a point against Brighton, only three points would do against Oldham.

I went to the game last night and this peformance was far the turgid displays shown in recent weeks.

Boss Simon Grayson made three changes to the side that drew with Brighton. The most suprising and notable change came with the introduction of 18 year old Aidy White on the left wing in place of Bradley Johnson.

Luciano Becchio came in for Gary McSheffrey and Robert Snodgrass also started after his injury time equaliser against Brighton.

It was clear that the game plan for Leeds was to attack. White and Snodgrass were deployed on the wings to be the creative output using their pace and trickery. 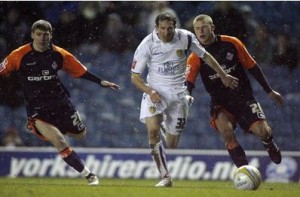 Pace was something that the whole team brought to the table throughout the game, never giving the visitors chance to settle on the ball.

Oldham were playing for a draw, a goalless one knowing that their record as the lowest scorers in the league meant they couldn't afford to conceed.

Knowing that Leeds were on a bad run of form, after winning the toss they forced Leeds to attack the Kop in the first half.

But the pace and, for once, the creativity of Leeds was starting to open up Oldham.

Andy Hughes who was superb at right back overlapped Snodgrass and his cross who hit on the half volley by Beckford, but the prolific striker hooked it wide. That was just after 7 minutes.

Pawel Abbott had a extremely rare chance for Oldham on the counter, with his shot across goal going wide of Ankergren's right hand post.

Then it was back on the attack for Leeds.

The fluidity and creativity was more like the Leeds of early season. Aidy White was particularly ctaching the eye with some intelligent running and passing.

Howson had a chance just outside the box which he put over the bar, and Snodgrass forced a fumble from Oldham keeper Dean Brill and also opened up an opportunity which he hit just wide.

It was frustrating for Leeds for the reason that they deserved more than they had. 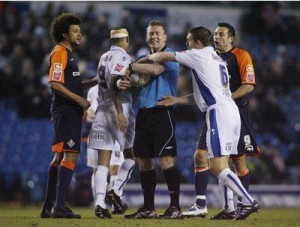 The work rate was immense and even though some passes went astray, it seemed only a matter of time before the home side would go in front.

Micky Doyle had a great chance when the ball bobbled around the area and fell to the Irishman 7 yards out by Brill's right hand post but after taking a touch the Oldham keeper closed him down to make the save.

It looked like the chance for a goal would come from a penalty after Becchio was bundled over by Ruben Hazell just inside the box, but the referee missed it. It was a clear cut penalty.

The boos rang out for the referee at half time and the cues of 'you're not fit to referee.'

If the first half saw endeavour and not quite taking what they made, the second half saw even more creativity and this time taking their chances.

The first goal came on 53 minutes when Aidy White went on another run into the centre of the park, as he and Snodgrass regularly swapped wings which caused chaos, and he found Beckford wide left.

The striker then skipped past the right back and his shot across the face of goal was saved by Brill, but Becchio was there to tap home. 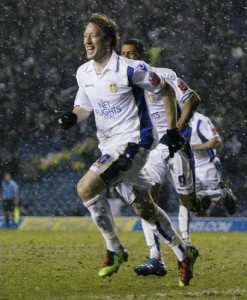 The second came just 9 minutes later when Snodgrass showed some great skill to get to the byline and his chip from the right found Becchio again at the far post and he rose up to head home.

Aidy White then made way for Max Gradel safe in the knowledge that it was a good night's work, and was duly applauded by the Leeds fans. He brought skill, pace, creativity unseen in recent games.

On the other wing Snodgrass was causing the chaos that Leeds fans know he is capable of, but maybe hasn't shown.

And after his own criticism of his performance against Walsall which he publicly spoke about, he was showing trickery of feet and passing of the highest quality that made Sean Gregan and his defence plead for no more.

Credit to Oldham though they did try (sort of) to get back into the game but the uninspring front two of Jason Price and Pawel Abbott showed why they were the lowest scorers. 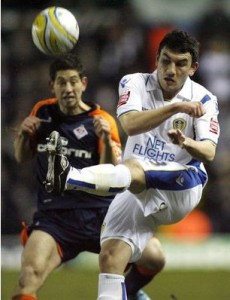 Winger Chris Taylor (who is still in Andy Hughes pocket) came closest to scoring forcing a save from Ankergren diving to his left and Price, after getting the ball tangled in his feet, managed to poke a shot in from 6 yards out but Andy Hughes was again in the right place at the right time.

But really Leeds for the first time since late December, never looked like conceeding and closed the game out with ease.

The result moves Leeds 4 points clear of Colchester after their game was postponed due to snow and 6 points clear of Charlton in fourth after their defeat to Brighton at the Valley. Norwich's late win against Southend at Carrow Road means they stay 3 points in front but Leeds do have a game in hand.

A deserved, committed and creative performance more like the Leeds of early season and once which will need to regularly turn up in the next few games.

The performance of Aidy White, the dominance of the Whites and the huge deluge of snow, meant it was truly.....an all-white night for the club....i'm sorry.