A trait of the Leeds team from the first half of the season returned on saturday at Leyton Orient. 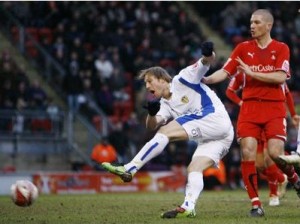 The never say die attitude which has seen Leeds fightback in matches and claim late late goals was shown once more.

After going 1-0 down at Brisbane Road with just 7 minutes of normal time remaining, they fought on and Luciano Becchio scored a fortuitous goal 5 minutes into injury time to secure a draw.

Anything less than a draw would've been extremely harsh on the visitors as they dominated the match form start to finish.

The stats in the first half showed alot. 11 shots on goal for Leeds, Leyton Orient just had 2. But wasted chances and fine goalkeeping from O's keeper Jamie Jones had kept out McSheffrey, Bromby and the impressive Snodgrass.

The domination continued in the second half although the hosts woke up slightly.

But the thought of them scoring seemed unlikely as Leeds were comfortable. A fact shown when Orient took off their leading goal scorer Scott McGleish. Kept quiet by the Leeds backline. 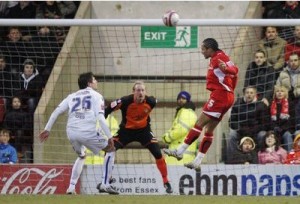 Until a Nicky Adams cross found the big skipper Tamika Mkandawire who got his sixth of the season after losing his marker at the back post to head past Ankergren.

Cruel, harsh, unfair, but the unlike in previous league games, the grit and determination came back and Leeds continued to bombard the Orient goal.

And with 20 seconds left in injury time, after a game of penalty box pinball after attempts from Johnson and McSheffrey were blocked, the ball fell to Argentine striker Becchio whose effort appeared to be bobbling wide, but defender Charlie Daniels diverted the ball past his helpless keeper.

Justice was done. And again showing that despite Beckford's absence Leeds can score goals and get results.

Boss Simon Grayson made his intentions clear about wanting to change the way things had been going with a number of alterations to his line up.

Crowe kept his right back spot after his goal against Carlisle, while Michalik dropped out and Bromby coming in to partner Naylor at the back.

In Midfield Doyle and Howson who were brought off in midweek were left out and their replacements that night Kilkenny and Johnson both started.

The shock decision came when Max Gradel was partnered up front with Becchio; Snodgrass and McSheffrey were placed on the wings, despite both having strikers experience, one at a premier league level.

And with making these changes Grayson got a response. Leeds hardly seemed troubled at the back at all, akin to their early season form and their midfield were interchanging and passing around to devastating effect creating chances and confusing the Orient side.

The changes in the centre midfield partnership made a huge impact on the side.

Kilkenny and Johnson were described as running the midfield by Grayson after the match and the stats suggested so. 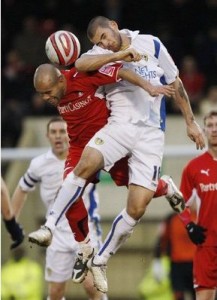 The sheer number of chances created by the midfield showed this and without seeing the action myself maybe this could be the start of something beautiful.

Bradley Johnson hasn't started in centre midfield yet for Leeds but a loan spell at Brighton last season saw him score 5 goals in 10 appearances in that role.

His form on the left in early season had seen get 6 goals in the league, and thats in an unfamiliar role. At centre mid, he could provide alot more for Leeds.

And with Snodgrass, Gradel, McSheffrey and White all natural wingers, he could get the chance for regular action in the centre and flourish.

There has been much criticism from Leeds fans about Doyle and Howson being anonymous in recent games with the side resorting to long ball tactics. It seemed to be far from that yesterday.

Earlier in the season Leeds played it on the floor and looked good doing it, and again this match showed a return to the Leeds of August to December.

But not starting a striker up front like Grella or McSheffrey up front with Becchio clearly put Leeds at a disadvantage as chances were wasted.

Grella who has scored regularly when making sub apperances which he showed again in midweek against Carlisle, must be thinking what does he have to do.

One could say though maybe those wasted chances could've been scored by a Beckford.

But I argue maybe they could've been scored by a player familiar in the forwards position like Grella or McSheffrey; but not Gradel; he's never been known as a striker, so that decision confused me and maybe cost us.

Still a good point considering the form of Orient who haven't lost in 2010 and had a fine home form going into the match.

The never say die attitude meant they gained a vital point, unfortunately with 10 minutes to go, Norwich were losing again but came back to win at Brighton 2-1.

So Leeds find themselves 4 points off top with 2 games in hand and 5 ahead of Charlton with soon to be two games in hand once the Addicks play on Monday night.

It's far from despair, it continues an unbeaten run in the league to three, with a win at home and two away draws. They say win your home games and draw your away games and its promotion winning form.

We shall see in the next 10 days as Leeds have three home games against Walsall, Brighton and Oldham. Walsall being one of Leeds' two games in hand. 9 points from those 3 games is a must.