Carlisle 2 Leeds 3, Whites out on penalties

Share All sharing options for: Carlisle 2 Leeds 3, Whites out on penalties

Leeds missed out on a trip to Wembley last night in the JPT northern area final 2nd leg. 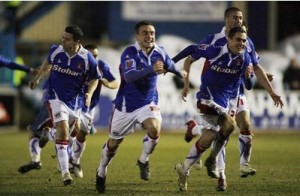 The Whites won the match 3-2 on the night leading to penalties as it was 4-4 on aggregate. The resultant shoot out saw Leeds lose 6-5.

Brunton Park may have been the scenes of jubilation from Leeds fans two eyars ago when they booked a place at Wembley for the League One play off final.

But this time, the cumbrians avoided the disappointment caused by Jonny Howson 2 years ago and did just enough to get through. 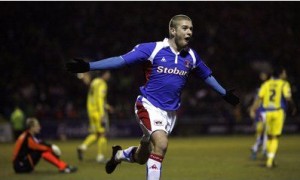 Carlisle took the lead just after the half hour, when Adam Clayton picked up on a deflected pass and his shot bobbled in past Casper Ankergren. 1-0 on the night 3-1 to Carlisle on aggregate.

After a dire first half, Leeds were re-invigorated and equalised 2 minutes into the second half.

Robert Snodgrass capitalised after former Leeds defender Ian Harte misjudged a header back to his keeper and the Scot nipped in to finish for 1-1, 3-2 on aggregate. 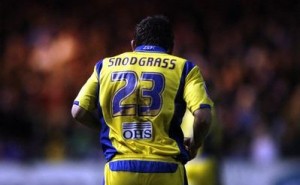 Leeds were starting to get back into the game, but were dealt a killer blow on 72 minutes.

Boss Simon Grayson made a positive change taking off both Doyle and Howson in the centre of the park bringing on Kilkenny and Johnson, but a defensive mistake this time by Lubomir Michalik lead to Hurst curling in a lovely finish for a 2-1, 4-2 aggregate lead. It looked like game over.

Never count out this Leeds side though, and the 2 earlier subsitutions were starting to pay dividends, combined with the next sub of American Mike Grella coming on for centre back Richard Naylor.

Leeds were pushing on with Gradel and McSheffrey down the wings supporting Becchio, Snodgrass and Grella. A bold move.

And it worked but with a goal from none of those players. Right back Jason Crowe who scored his first goal for the club in the first leg made it 2-2 on the night and 4-3 on aggregate on 80 minutes with a fantastic strike.

And the seemingly impossible happened on 86 minutes as sub Grella scored, Lowry and McSheffrey combing well with the latter crossing in for the American to make it 3-2 on the night to Leeds and 4-4 on aggregate.

And despite three late chances all well saved in the dying minutes of injury it went to penalties. 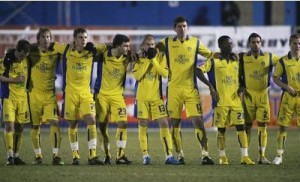 Now as many Leeds fans know, penalties aren't our thing. Considering these were to be taken in front of a packed home end, the odds were stacked against us.

The nervewracking, cruel and luck filled event that is a penalty shoot out leaves all fans with that feeling of sheer horror and dread. A feeling only replicated by hanging off the edge of a cliff with only a rubber band to keep you from falling to your death.

The next 4 penalties were scored and it was sudden death. Horwood and Kilkenny were successful, 5-5. Robson then made it 6-5 Carlisle and that how it ended as young left back Shane Lowry missed for Leeds to send Carlisle into the final.

The game was on Sky but I don't have sky and Radio Leeds couldn't commentate on what was happening, so I was going by Sky Sports news, my heart was in my mouth. They kept cutting away and going to other matches. I DON'T CARE THERE'S A PENALTY SHOOT OUT GOING ON, PORTSMOUTH CAN SOD OFF! It was torture.

But what happened after the game stunned me. 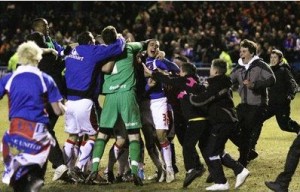 Sky Sports News showed pictures of Carlisle fans invading the pitch, fair enough in my many ways as they had just reached Wembley. I think most teams fans would even if it isn't meant to happen.

But then despite what the Carlisle managing director called as 'textbook' when referring to the policing and stewarding after the match, I saw several Leeds players goaded and some attacked.

Right at the front of the screen Lowry was smacked in the back of the head and was held back by physio Harvey Sharman as he tried to have a go back at the fans.

Simon Grayson said that three of his players were attacked. Robert Snodgrass, Lubo Michalik and Lowry all were either slapped or ppushed by fans as they were trying to get off the pitch. No police or stewards stepped in. 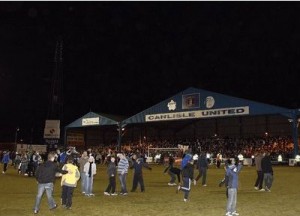 "As far as Carlisle United and Cumbria Police are concerned, the policing and the stewarding of the match was conducted in a restrained and professional manner.

"The job of the police is to support the stewards, to prevent disorder and respond to incidents as they occur, which is exactly what we did. As soon as the pitch invasion commenced we began working with the stewards to clear the pitch and protect the away fans. We dealt with the situation swiftly and robustly.

"Overall, we arrested 10 people for minor disorder and drunkenness offences, and we will progress banning orders for these individuals where appropriate.

"We will now conduct our usual post-match debrief and review. There has been no formal complaint from Leeds at this stage but, if received, will be robustly investigated."

But Leeds chief exec Shaun Harvey on the LUFC official website says they will take this higher.

"It is our current intention to make a formal complaint to the football authorities about the apparent lack of security arrangements in relation to the safety of our players at Carlisle."

"It is also our intention to supplement the evidence we already have by having further conversations with both Carlisle United Football Club and the Cumbria Police Force."

It also transpires that during the penalty shoot out, a blue laser was flashed in the eyes of the Leeds players as they were taking penalties at the home end. Nothing was done.

Not wanting to play Devil's advocate but if this were Leeds fans, the book would be slammed on us and no doubt we would've been harshly dealt with. Hopefully the Carlisle fans will be too. It's disgusting. 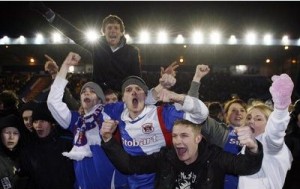 The issue of why the penalties weren't taken at the empty end of the ground to avoid anything like this happening would've made much more sense, but again the referee was assured by a safety certificate that there would be no problems at the home end. Wrong.

It's common sense in such a highly strung match with so much riding on it to make it as fair as possible. By the way i'd be the saying the same things if it was the other way round.

All in all it was dealt with terribly and reading numerous messageboards, Leeds fans saw all this and were also treated terribly, because simply they were Leeds fans. But you can't ignore the bleeding obvious of whats going on in front of you.

No waty should any player be attacked by fans when trying to leave the pitch, its disgraceful behaviour tantamount to thuggery and assault.

Something needs to be done and punishments need to be dished out to avoid this happening again.