Leeds United once again surrendered vital points from a match winning situation at Elland Road on Tuesday against Portsmouth.

On Boxing Day Leeds had to settle for a point after they conceded two goals in ten minutes to draw away at Leicester. Most would have took that result and were looking for another impressive performance from Leeds against Portsmouth.

Simon Grayson made some changes to his team ahead of the match, starting striker Billy Paynter and Ross McCormack up front for the first time. Luciano Becchio and Neil Kilkenny dropped to the bench, to allow Leeds to play 4-4-2 something we have not seen at Elland Road for some time.

The Whites got off to an ideal start in front of a packed Elland Road, scoring two goals inside the first ten minutes. Max Gradel was at the back post to tap in Billy Paynter's headed pass to score his 8th of the season. Jonny Howson doubled United's lead three minutes later, twisting and turning his way threw the Pompey defence to place his shot past Ashdown. 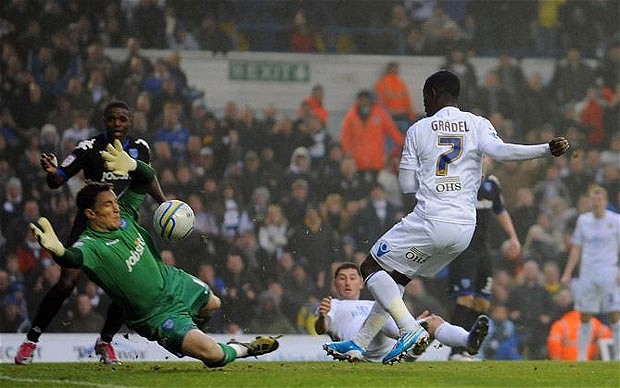 After an action packed first 10 minutes Leeds missed several chances to finish the game off, Billy Paynter missed from close range after some nifty footwork from strike partner Ross McCormack. McCormack himself then managed to find some space before firing straight at Portsmouth keeper Jamie Ashdown.

Portsmouth themselves had several chances before the break through finally came. David Nugent found himself with time and space before releasing his powerful shot across goal and past the helpless Kasper Schmeichel. Transfer-listed midfielder Bradley Johnson restored Leeds' two goal cushion in the 61st minute and celebrated by tapping the badge, which did not go down well with most supporters.

The two goal cushion lasted a mere 60 seconds, Leeds failed to keep the ball and gifted possession to Richard Hughes who's shot took a big deflection off Andy O'Brien to make it 3-2. Leeds should have been given a penalty after Ross McCormack was bundled over by Sonko, the referee didn't see it which was not a surprise, he failed to give many decisions to both teams all game.

In the 92nd minute Portsmouth managed to take advantage of some poor defending by Leeds. Lloyd Sam was lazy to say the least, and his lack of commitment allowed substitute Ciftci space on the right. His cross showed have been cleared, somehow Schmeichel and O'Brien got in each others way and the ball hit O'Brien and rolled into the back of the empty net.

Leeds managed to stretch their unbeaten run to eleven games, however they have dropped 4 points in the past two games and Leeds could be sitting pretty in second place if it wasn't for some poor defending. If Leeds are serious about pushing for promotion back to the Premier League they need to sign some fresh faces in January.

The referee was poor all game and that adds to the frustration of what might have been, Cardiff were battered away from home by Watford and Leeds could have capitalised on that. The football at times is brilliant and Leeds could be contenders come the end of the season if these individual mistakes can be cut out.