Max Gradel struck in each half to extend Leeds' unbeaten run to nine games at the expense of table toppers QPR.

The result saw Leeds move up to 2nd in the table, three points behind the Londoners after QPR suffered back-to-back defeats.

Cardiff's game against Burnley was postponed due to the snow, and Sheffield United snatched all three points against Swansea to allow Leeds to move into the automatic promotion places.

Shortly after kick-off Leeds suffered a major setback losing Alex Bruce to injury who was replaced by Leigh Bromby.

Leeds dominated most of the game, playing the better football of the two sides, but could have easily gone behind early on, Orr fired over the bar and former Leeds striker Rob Hulse saw his header saved by Schmeichel.

Luciano Becchio nearly added to his impressive tally for the season with a header, but for a finger-tip save from QPR keeper Paddy Kenny.

The breakthrough came after 25minutes, Robert Snodgrass twisted and turned his way through the QPR defence to cross to the far post where Gradel reacted quickest to fire Leeds into the lead.

Leeds got the killer second goal after Gradel picked the ball up in his own half and was allowed time and space to turn inside and power his shot past the helpless Paddy Kenny. 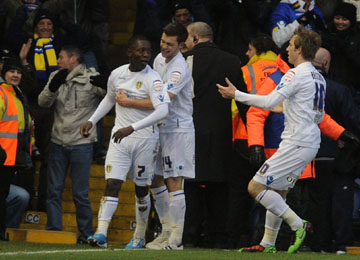 My man of the match:

This was the best performance of the season for me, to beat QPR and keep a clean sheet shows we have the squad to challenge at the top of this division. Many players deserve credit today Bromby, Snodgrass and Gradel were outstanding but for me Bradley Johnson had his best game of the season.

I am not the biggest fan of Johnson and wouldn't be too fussed if he left in January, today however he proved me wrong, he was strong in midfield and bossed the centre of the park.