Saturday gives Leeds fans the first chance to say thank you and well done to their team. 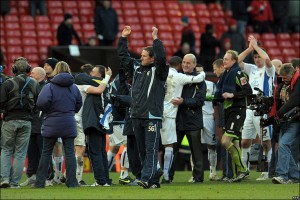 Unless you've been hiding in a cave for the last week, you won't have failed to notice that Leeds defeated the old enemy Man U for the first time in nearly 29 years at Old Trafford.

But considering we are in League One means the achievement of these lads is unbelievable and to keep a clean sheet means they have well and truly written their names into Leeds United folklore.

It almost possible to forget that we actually have a match tomorrow. Wycombe come to town struggling at the wrong end of the table.

With only 18 points and 6 points from safety, it's been a tough time for the Chairboys after their promotion from League Two.

While their defence also leaves alot to be desired. Joint second worst, with a GD of -22 conceeding 46 goals.

Their league form away from home also gives their fans and manager a headache. 1 win from 12 games with 8 defeats. You think that Wycombe don't stand much of a chance.

Because if you combine this with the fact that Leeds haven't lost at home in the league since January 10th 2009. So if the Whites avoid defeat, they'll have gone a whole calendar year without a league loss at home.

Plus the fact the formidable defence that has been built this season at Elland Road means that Leeds have only conceeded 7 goals and scored 25. 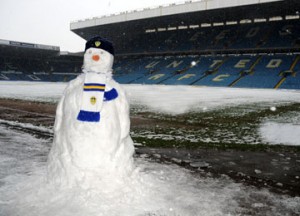 Considering all this, Wycombe fans will be travelling in hope more than expectation.

And travel they will as the match at Elland Road is actually happening after undersoil heating, plus superb efforts to clear the stands and surrounding areas from snow and ice means that the club passed a safety inspection this afternoon and no further inspections will be made.

It's one of only 10 games in England's top 4 divisions going ahead tomorrow thanks to the big freeze which has seen snow and temperatures plummet to as low of -17 in some areas.

Credit has to go to everyone at Leeds United for getting the game on.

Wycombe haven't faced Leeds United at Elland Road in the league before and so it will be a big day out for their fans and some of their players, bar two.

Michael Duberry and Ian Westlake both return to their former side this weekend.

Duberry who played for Leeds in the Champions League before the famous Bowyer Woodgate trial in which he gave evidence against the pair led to him being branded a judas by fans and his career never recovered at Elland Road.

Westlake joined Leeds under the stewardship of Kevin Blackwell for a near £750,000 which put instant pressure on the young midfielder from Ipswich and fialed to live up to expectations.

After loans spells away from the club, he left to join Cheltenham on a permanent deal before. He probably won't get a hard time from the fans. Duberry will.

Looking at the stats earlier you'd expect an easy win, but like Stockport did at Edgley Park, teams raise their game against Leeds and it's never easy.

But riding on the crest of a big wave not just in the league but after their cup exploits, confidence will be riding high and hopefully Leeds can play out a win.