Swindon Town vs Leeds. Time to get back on track after Tottenham!

Share All sharing options for: Swindon Town vs Leeds. Time to get back on track after Tottenham!

After more FA Cup euphoria against Spurs on Saturday, it's back to what boss Simon Grayson calls 'our bread and butter'.

Speaking on the official LUFC website, he's well aware of what Swindon will bring to a game which has a lot riding on it.

"We expect a tough game against Swindon, but we will try and win the game, because thats what we need to do.

"Swindon will be well organised, they have some good talent...but if we're fully at our game we can be untouchable sometimes."

It's that belief that Grayson gets across to his players and that has put them top for 4 months until saturdays league win for Norwich. 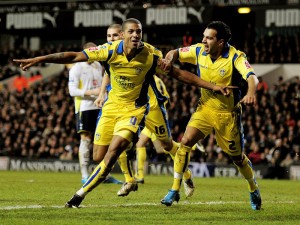 It's that belief that has seen them beat Manchester United and force a replay with a last minute penalty at Spurs.

Yes the opponents may be better in terms of players and quality, but we can still have 'em! We know we can take on anyone on our day, and we need to carry that mentality into tonight's game.

Far too easily can the mind slip after playing premiership teams and getting results that 'it's elementary Watson' that we'll beat a league one team.

Unfortunately as our recent run suggests, it's not that easy. A home draw to second from bottom Wycombe and a defeat away at bottom third team Exeter shows that any Old Trafford win can be quickly erased.

Hopefully though the last minute euphoria and the effort given to get that injury time penalty to equalise will give the players a boost.

The squad has stayed down south and trained Sunday and Monday and so haven't had to make a long journey to stiffen tired legs. They just went back to their hotel near by after the match at White Hart Lane and prepared in ideal style.

A help to their preparations will be the resting of some players for the Spurs game.

Luciano Becchio only played the last fifteen minutes and so will be fresh if he starts against the Robins. Also Richard Naylor missed out with a back injury, and the influential captain is back in the reckoning.

Leeds also have Ben Parker in contention if needed after a torrid time recovering from knee and hip problems sustained on the opening day of the season.

But one massive bonus comes in the form of Max Gradel. 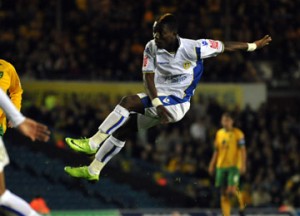 The Ivorian who had been with the club for 3 months on loan has joined the club on a 2 and half year deal from Leicester.

The club agreed a fee for his services after the winger handed a transfer request at the Walkers soon after his return from his loan spell. Once more the fee was described as 'undisclosed' but it is thought to be in the region of £250,000.

Gradel became an instant hit after his debut sub appearance against Norwich at Elland Road which inspired Leeds to a 2-1 win. His pace, trickery and an eye for goal has caught the imagination of Leeds fans, and his regular sub appearances often change games.

An exciting young player and genuine pacy winger, is something all Leeds fans love to see. Now he's here permanently, we have to see if he can cut the mustard over a full 90 minutes, don't be suprised to see him start against Swindon as again, he has fresh legs.

Grayson stuck with the same starting line up against Wycombe that beat Manchester United bar Andy Hughes who was injured. And many would say deservedly so, riding on a crest of a wave, but it backfired with clearly tiring legs.

Personally I wouldn't do the same thing this time, we have capable fresh legs as back up, now is the time to use them.

Alot will also depend on the formation he decides to use. Against Tottenham, he switched to using a 4-4-1-1 with Snodgrass playing just behind Beckford which worked to perfection. Snodgrass was creative and incisive in that free role combining with the intelligent running of Beckford.

Becchio was the man to drop out, could that formation be effective again? It lead to a lack of crosses into the box and playing through the middle, against a strong promotion side like Swindon who have only lost once at home all season, it's tough to choose.

I really don't know who he will play it, personally i'd go back to 4-4-2 and have Becchio start as he's fresh, his hold up play and capability to win headers is a priceless asset in this league but maybe i'd try and have Snodgrass in that free role just behind the front two.

He showed real effectiveness there that he hadn't shown on the wing, his intelligence and creative ability came into full view for everyone to see.

But with players like former Leeds midfielder Jonathan Douglas in the Swindon team, it will be a tough battle.

5th in the table and without a defeat in five games, Danny Wilson's men are making a slient but deadly assent in the table.

Their only home defeat cam against Hartlepool in mid October. Alot of the great form has been down to striker Billy Paynter.

10 goals in his last 14 matches in all competitions means he is a serious threat to the Leeds goal. His strike partner Charlie Austin is not to shabby either with 8 goals to his name.

But bar those two, their strike rate is one of the worst in the top 6. Only scoring 35 and conceeding 30, their goal difference of +5 is the worst by a mile in the top 6.

Which shows that they are vulnerable if got at. Silence their strike force and they are there for the taking.

Although at the moment the same could be said about Beckford and Leeds.

After Charlton's defeat against Leyton Orient at home last night, Leeds are second on goal difference behind Norwich with two games in hand and 3 points ahead of Charlton in 3rd with the same games in hand.

So any sort of points tonight would put Leeds back on top with the bonus of another game in hand.

The Cup run is nice, but give me promotion anyday. After the recent league blip, tonight's match could be one of the biggest of the season for the Whites. It either gets Leeds back on track, or seriously dent confidence and momentum.