But not the one you may think. 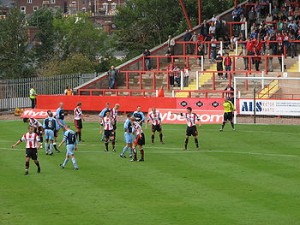 The rumours still circulate around striker Jermaine Beckford's future and going to St James' Park. And he'll get the chance to go this weekend, but probably not to the one he was expecting.

Leeds travel to Exeter City's St James' Park this weekend which compared with the one in the North East is slightly different.

But he like the rest of the table topping team will be looking to put behind them a dismal 1-1 home draw to relegation threatened Wycombe Wanderers last saturday. 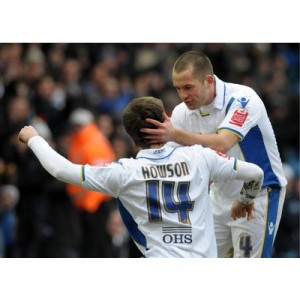 After Jonny Howson gave the home side an early lead on 3 minutes, Leeds never pushed on and Wycombe created the better chances and could've have won the game, but John Paul Pittman scored their only goal just after the hour.

Boss Simon Grayson said that the phrase probably mentioned after the match would be 'After the Lord Mayor's show' because of the Whites heroic giant killing of Machester United at Old Trafford the week before, but I promise Simon I won't mention it anywhere in this article...ah...damn.

It was a poor performance though, there were some jaded legs after the previous weekend and Leeds were just off the pace. The first touch from pretty much the whole team were poor and Wycombe were picking out spaces behind a usually resolute back four. But again the fatigue was showing.

Despite this though they held out for a draw and created a new record which would be the envy of any team. Undefeated in the league at home for a whole calendar year. Well done lads, one hell of an achievement.

On the road this season Leeds have been even better than at Elland Road, and their first ever trip to Exeter will present a giant killing mentality in their opponents.

And like many of the teams in the division, Exeter have used their ground to their advantage and as such have a solid home record.

4 wins 6 draws and only two defeats and a plus four goal difference shows where the majority of their points have been picked up this season.

Lying in 18th place their away form leaves alot to be desired and for Grecians boss Paul Tisdale, he needs to keep capitalizing on that home form to see them keep in the division which is their highest ever.

But away from home Leeds have an even better defensive record than at home. Only 6 goals conceeded in 11 games. Simply remarkable.

Like with every match this season, Leeds won't travel with fear. They know they are capable of getting a result. Especially with players like Beckford in the squad.

As for Exeter, Leeds wont line up against a former striker in Barry Corr.

The Irish forward who started his career at Elland Road and was released in 2005 where he joined Sheffield Wednesday, was sent off just before christmas for kicking out at Southend midfielder Chris Grant during their 1-0 home win to the shrimpers. He serves the final match of his 4 game ban.

But one thing thats striking looking at their goal scorers this season is that the goals are well spread across the team.

Adam Stansfield stands out on 5 but midfielder Ryan Harley and forward Richard Logan have 3 goals whilst 5 players have 2 goals and 4 players have one goal to their name.

It means Leeds will have to be on top of their game to keep everyone quiet in the match as there's goal threats all over the park.

As for the Leeds squad, Andrew Hughes returns after missing the Wycombe game with a hamstring strain picked up in the epic Man Utd win. A player I felt was missed last Saturday with midfielder Bradley Johnson having to step in.

Ben Parker completed 90 minutes for the first time in the reserves 6-1 win against Scunthorpe, but this weekend may come too soon for the highly rated left back who injured himself after just 28 minutes against Exeter on the opening day.

Mike Grella also impressed with two goals and could be pushing for a starting place.

However Enoch Showumni won't be with the team following his departure from Elland Road this week. 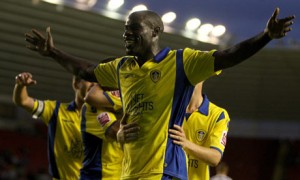 The big Nigerian has had his contract terminated by mutual consent and looks set to join Scottish side Falkirk.

Never really rated by the fans despite his huge physical presence, his ability to turn from a 6ft 4in man when standing to a 5ft 4in man when jumping was quite something.

But limited appearances means he moves on along with three youngsters in Jonathan Webb, Josh Falkingham and Ollie Hitchkiss, who is expected to join Mansfield following his loan spell there.

Rui Marques is away with Angola on international duty and is the only other player missing for Leeds.

With the possibility of Hughes coming in at left back meaning Johnson moves back into the midfield, Howson could be the one dropping out for Snodgrass to start on the opposite wing.

If it is the same starting line up as last week, they will certainly want to prove something after the poor show against Wycombe. A result which led to Norwich closing the gap on the leaders to 6 points after their win against...Exeter.

As for Beckford, yep he's still here but will need a much better performance to secure that move to the other St James' Park. Lets hope he scores in Devon's version before he moves to the North East version.