Share All sharing options for: Leeds falls to Huddersfield Town 1 - 0 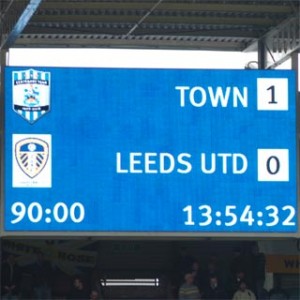 Leeds away-form woes continued as they fell to Huddersfield Town 1 - 0 today in what is best termed a lifeless, yet thoroughly predictable performance. While the cutting tone will amuse few, Leeds is a side that whether Gary McAllister was in-charge or now, Simon Grayson, they used their attacking strong-suit miserly and effectively played to the least of their abilities.

Returning the match, Leeds lone change to last weeks line-up was week, Luciano Becchio replacing the suspended Jermaine Beckford up front. What did remain was Leeds highly predictable approach to play, poor but easily followed movement without the ball and a lack of urgency in the transition. The Terriers took the 1-0 lead sixteen minutes into the match when Nathan Clarke headed-in Gary Roberts corner past Casper Ankergren. Hunting for the leveling goal Robert Snodgrass fine corner was nodded on by Rui Marques' from inside the six yard box but Huddersfield 'keeper Alex Smithies was brilliant saving the lead. Young Lucas Jutkiewicz, on-loan from Everton nearly doubled the lead for Hudderfield before the break but the Leeds keeper was able to flick it above the cross bar. Seven minutes after the break, or better said fifty-two minutes after he should have been called upon, Jonny Howson entered the match and while the scoreline obvious notes his impact wasn't dramatic, Leeds did show a quicker tempo and greater resolve. The hometown boy came close just before the hour mark with a nice header attempt and continued trying to push the tempo faster but it was to no avail. Leeds drove forward and with three minutes Richard Naylor headed Andy Robinson's free kick against the post but that was as close as it would get and Leeds lost 1-0.

For Leeds it is a disheartening loss but unless you are blinded by hope, it was predictable. Unfortunately with the managerial change there tempo and style of attacking has not changed and while Mr. Grayson has worked hard to shore up the defending blunders that plagued the first part of the campaign, he has not addressed the true issues. Shuffling players will do little when you play a style that has effectively taken what is the foundation of a fine attacking unit in the Championship and combined it the qualities of Conference side, if not a young reserve unit.

The loss is particularly costly to Leeds as they fall considerably behind the playoff contenders. They return to play next Saturday against Hereford United.