Becchio is back but result is the same

Share All sharing options for: Becchio is back but result is the same 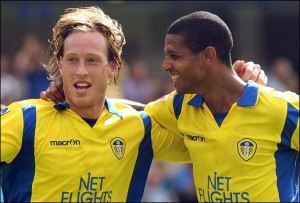 Kilkenny made a run from midfield as Max Gradel strived to keep a long pass in play by the dead ball line, he drove it across the front of goal for the aussie to knock in from close range.

Becchio then came on as a late second half second substitute after being out since early October but showed rustiness finishing nicely underneath Darryl Flahavan on 82 minutes.

It keeps Leeds on top by 6 points ahead of Charlton with a game in hand and 10 ahead of Norwich in third. But with a far superior goal difference, it's effectively one point more.

But another thing that made the win so satisfying was the strength in depth on display.

Simon Grayson made several changes to the line up including the introduction of Hogan Ephraim.

The number of changes raised a few eyebrows but it was the 21 year old's first appearance following his one month loan move from QPR.

He started on the left wing for Leeds supporting the front two of Gradel and Vokes. Beckford and Snodgrass were rested on the bench.

David Prutton made his first start since Boxing Day 2008 on the right side of midfield.

The back four was the same as against Kettering, and players missing included, Naylor, Kisnorbo, Hughes, Parker, Doyle, Johnson, Beckford, Becchio, Snodgrass, Higgs and Kandol. Snodgrass and Becchio came on later but Leeds still ran out comfortable winners.

It showed what luxuries we have this season, doesn't also include Grella, Showumni, Robinson or Marques. Most of these players would grace any League One team and even some Championship teams.

We had a good squad last season, but if we had made as many changes as last night we probably would never have got the result we did. Grayson seems to know his squad inside out and how to get a result with the players at this disposal.

Resting players just 48 hours after the televised FA cup match against Kettering in anticipation of the big Huddersfield derby match on saturday was the plan, and it worked perfectly.

Huddersfield can't say the same. Playing at home to bottom team Tranmere they had the lead three times and three times were pegged back. They never held the lead for more than 6 minutes combined.

If that can happen to them with one of the worst teams in this league, then they are there for the taking at Fortress Elland Road.

Leeds haven't lost at home since January and have the best defence in the football league only conceeding 8 goals in 18 games.

Huddersfield are a free scoring team though with players like Jordan Rhodes causing a constant threat after his summer move from Ipswich.

The Terriers who are 6th in League One do pose a threat but Leeds are after revenge after their West Yorkshire rivals did the double over them last season. It's left a bitter taste with all Leeds fans, myself included, i was there when we lost at home to them. A last minute winner was like a dagger in the heart. It prevented us from going top and our season never recovered fully.

If Leeds can keep their defence tight as they have done all season, then the home record should remain in tact. But its not going to be easy. A full house of just over 38,000 is expected. Brace yourselves for a gritty, full on passionate West Yorkshire derby.