Accrington Stanley, who are they?

Share All sharing options for: Accrington Stanley, who are they?

They're dangerous. That's who. 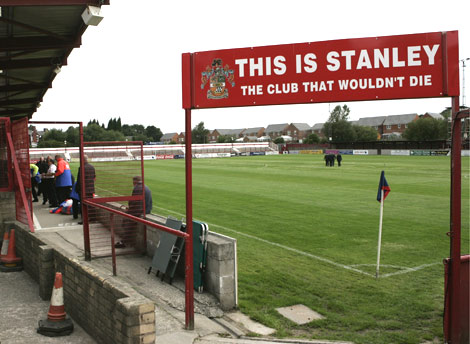 Never underestimate Accrington, do so at your peril. The club which has already gone bust once in 1966 avoided it happening again after paying back a £308,000 bill to the tax man.

With the support of other fans and clubs, Stanley kept their place in the football league and have taken it by storm since.

Accrington have a unbeaten away record stretching back to October 3. Their latest result was a win at Notts County and Stanley have won their last 4 matches in all competitions.

John Coleman's side visit Elland Road tomorrow to face Leeds in the JPT Northern section semi final with a renewed confidence. But they come up against a team who have only lost once at home in all competitions since January.

Grant was switched from the left wing to centre forward and has scored 9 of those 12 goals since the change. 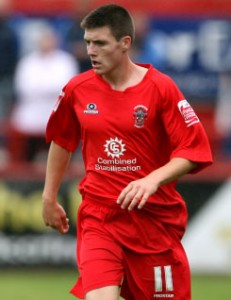 The 19 year old scouser has been the subject of speculation following his impressive season with Derby County rumoured to be tracking his progress.

As for his fellow Liverpudlian Symes, the 26 year old has impressed since making his move from Shrewsbury permanent in the summer.

Pitching in with 12 goals as well, the former Everton forward is not shy in front of goal and will be looking to cause Leeds problems.

A possibly familiar face in Leeds loanee defender Tom Lees is unavailable for the clash due to the terms in his loan deal.

As for Simon Grayson, he is slowly but surely welcoming back more players from the injury list.

Paddy Kisnorbo came back in the team at the heart of the defence for the Brentford game and came through without any trouble.

And once more the Aussie international put in a assured performance alongside Leigh Bromby to help keep another clean sheet in a 0-0 draw.

Kisnorbo will need to be on top form with the whole defence to keep out the super striker force that is Symes and Grant.

Captain Richard Naylor was on the bench for the match at Griffin Park and although he didn't come on, it looks like he could feature tomorrow night.

Bradley Johnson and keeper Shane Higgs both returned to training this week but the Accrington game might be too soon for them.

Robert Snodgrass is available again after his one match suspension leaving him to fight it out with Max Gradel for a place on the right wing.

After impressing against Kettering with a 2 goal cameo appearance from the bench, the Italian American or American Italian striker will be looking for a starting place.

One thing the manager will be looking for is that Leeds start to take their chances. Once more despite having the better chances against Brentford, the Whites failed to make them count and so could only take a point away when possibly three wouldn't have been an unfair reward.

The faithful fans of Leeds know that a win would mean a place in the northern section final. A match played over two legs against either Carlisle or Bradford City.

The winner of that match after the home and away legs will have a trip to Wembley to savour.

For the simple reason that only teams from Leagues One and Two can compete. And Leeds are top of League One.

So in theory, the Whites are the top team. But coming from a battle weary Leeds fan, it never works like that. Leeds don't do finals.

But for now they've got to make sure they get there. Accrington will be backed by just over a thousand supporters who are making the trip across the pennines. And after seeing Kettering take Leeds to extra time, the League Two side might fancy their chances.

They've been kicked down before but have come back stronger now, it's what Accrington Stanley do best. The ultimate underdogs will be taking it to Leeds to show that their bite is worse than their bark.