Manchester United vs Leeds United. It's on.

Share All sharing options for: Manchester United vs Leeds United. It's on.

The war of the roses. Red versus White. Yorkshire vs Lancashire. However you look at it, it is without doubt one of the biggest football rivalries.

After Kettering eventually succumbed to Leeds' dominance at Elland Road on tuesday night, the Whites now have they trip they and their
fans have been craving for. 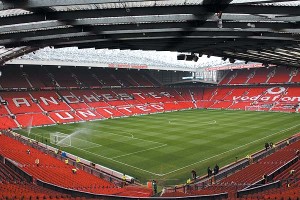 Old Trafford awaits the League One leaders and pretty much every Manchester United fan going will also be excited.

Why Leeds fans were so eager for it I don't know because we hardly ever won. But maybe that was why. The possibility of getting one over on the enemy.

Every Leeds fan can remember the times they have beaten Manchester United in their living memory. I know I can. 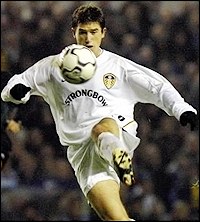 It was at Elland Road, my first year as a season ticket holder in 2002/3 season. Harry Kewell scored a header in the 69th minute past Barthez for a 1-0 win. Chants of Rio Rio whats the score rang out, it was one of the best moments of my life.

Even rarer are the moments we win at Old Trafford. I've never seen it happen.

And if all Leeds fans are being honest the chances of us winning this game are even slimmer.

When we were in the same league as Manchester United we struggled to beat them at Old Trafford, but now we are two leagues below them.

Yes teams two divisions below us have knocked out League One teams. But the gulf between Premier League and League One are VASTLY different to that of League One and the Blue Square Premier.

Even our full strength team would struggle against a radically changed Manchester side. It's not being pessimistic it's just realism.

Though this is a big rivalry, I still think Sir Alex will make changes to his team, because we are still a League One team. And maybe, maybe, we could take advantage of that. But those coming into the changed team will know of the rivalry and will give that extra percentage that every team seems to give when playing us.

And lets face it even if Rooney, Vidic etc are rested, players like Macheda, Wellbeck, Anderson, Nani, those fuzzy twins, and god forbid Michael Owen, are all capable of coming in and picking up a result.

No doubt Leeds are well drilled and organised under Grayson. Players like Beckford and Snodgrass impressed against Liverpool earlier this season in the Carling Cup along with Becchio and Johnson. Having players like them along with Kisnorbo and Doyle who have big game experience will be vital. 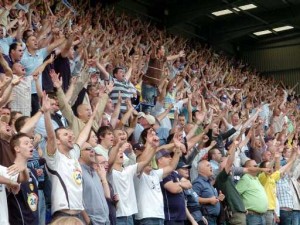 Old Trafford wouldn't normally be a sell out for a match between Man U and a League One team, but on this occassion, it'll be close.

Leeds have an allocation of 8,500, which we will fill, guaranteed, and with the history of this match being as it is, Man U fans will flock to Old Trafford to see this game. I'm predicting a sell out.

It has the hallmark of a cracking game, I hope it isn't a whitewash (or maybe I should say a redwash) and that it is a contest as it will add to the atmosphere and create a great tie for the tv audience watching on ITV1.

Same on tuesday night, despite it going to extra time at 1-1, we never gave up. We hammered them during 90 minutes but were sloppy second half and conceeded to former Leeds striker and fan Anthony Elding after the hour, but we kept going.

5-1 after extra time may have been harsh on Kettering, but we showed resilience that we didn't against Histon.

Italian American striker Mike Grella came on in the second half of extra time and scored two classy goals on top of a header from Kandol and an outstretched leg of Beckford in the space of 11 minutes.

Even though I hope it's a contest on January 3rd, one can't help but think it won't be much of one.

Leeds haven't won at Old Trafford since 1981, not an encouraging sign. But thats why Leeds fans are excited about this match every time it happens. It's the possibility, it's the hope, it's the dream.

It's the same excitement we've had for the last 28 years. Can we beat the old enemy on their turf? Marching on Together, we will at least try.