Andrew Lloyd Webber will go home crying tomorrow, if his face will let him.

Share All sharing options for: Andrew Lloyd Webber will go home crying tomorrow, if his face will let him.

Hopefully it won't be an ugly performance by the Whites against the team eagerly supported by the Phantom of the Opera writer. 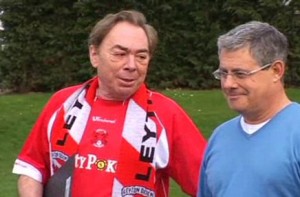 Leyton Orient make the trip to Elland Road and the musical maestro will know that despite winning against Tranmere at the weekend, it's going to be tough for the Londoners.

The O's won at Brisbane Road to end a dismal run of six games without a win, something that will no doubt have made Andrew's pumpkin like face smile (again if it's possible).

But in terms of facing the storming juggernaut that is Leeds United, the victory will probably mean very little.

Leeds go into the game on the back of a 3-0 away win at Brighton, and manager Simon Grayson described it on the official website as the best away performance of the season.

"We were in control, we passed it well with quality, we defended well when we had to do and I was delighted."

"From the first minute to the last we were professional, and they worked their socks off. You can say that every week, but we really pressed both individually and as a team on Saturday."

A key man in the win was Kilkenny, his performance was rated highly by most of the sunday papers and by his boss. 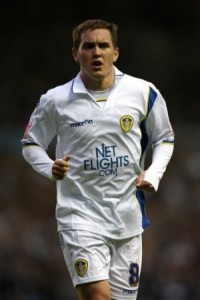 Two brilliant long balls from midfield by the Australian led to two goals. The first was touched back by Beckford just inside the area to Snodgrass who curled it delightfully across the keeper into the top left hand corner.

The second was played over the top of the back four, Beckford stayed onside, brought it down and slotted it home for 2-0.

Then Kilkenny himself got the third from a low ball into the area by sub David Prutton which left him unmarked 8 yards out and with a simple finish.

In only his second start of the season, Killa was brought in due to Bradley Johnson's injury. So Howson was pushed out wide and Kilkenny played alongside Doyle in the middle.

An always calming influence despite only being 23 years old, he is always reliable with his passing long or short, and can score some cracking goals. A memorable one for me was last season against Yeovil at Elland Road.

A low quiet crowd under floodlights were awoken by Killa's goal after he smacked a shot from 30 yards out which flew over the keeper into the net for the second goal in a 4-0 win. A stunner.

So now comes a dilemma for tomorrow nights match. If Johnson is fit again, does Kilkenny drop out once more? Or does either Howson or Doyle get replaced for the Aussie?

Once more though, it's a nice problem for Simon Grayson. Faced with a team who have the third worst away defence conceeding 18 and only scoring 7, the decision would suggest that it doesn't really matter who starts.

Johnson and Kilkenny can both get goals. For me though I would stick with Kilkenny. Purely because Johnson has been such a key player getting goals galore from midfield and casuing havoc on the left wing, it's worth resting him until fully fit. If it ain't broke...

The other change at Brighton came with an injury to Richard Naylor meaning Lubomir Michalik started.

Last season most Leeds fans would've been cursing under their breath knowing he would be in the team, but once more the Slovakian put in a solid performance and helped get another clean sheet. I say keep him in as well. Grayson has clearly helped him get his confidence back, lets keep that going.

The main threat from Leyton Orient for me comes from striker Scott McGleish.

The 35 year old has 7 goals to his name this season and always a threat. But with the best defence in the football league, only conceeding 8 goals in 16 games, he should be kept under wraps.

And once more I can't look beyond a Leeds win tomorrow night. Judging by the weather forecast, it wont be a great game to watch but United should pick up a comfortable win again.

And for Mr Lloyd Webber and his beloved O's, he'll be wondering 'how do you solve a problem like Leeds United?' On current form, you'll need a small explosive device.