A shrewd move that many Leeds fans were calling for and one duly delievered by manager Simon Grayson. 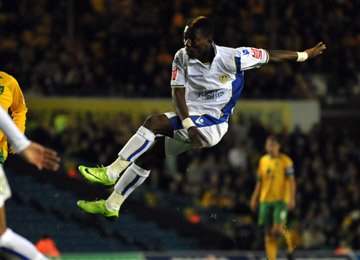 Max Gradel who has been with us for a month now on loan from Leicester has lit up Elland Road since his cameo sub appearance against Norwich.

He single handedly turned the game on its head in his ten minutes on the pitch and won the MOM award.

Very few players on a one month loan make such an impact with Leeds United fans. Very easily, perhaps too easily, Leeds fans dont give new players much of a chance, one bad appearance and they're castigated for life.

But one thing Gradel had on his side was that debut performance. Pacy, skillful, intelligent with the ball, he give excitement for the fans on the wing for the first time since, dare i say it, Harry Kewell.

Maybe a comparison thats a bit premature, but I honestly can't think of an out and out winger who has made such an impact.

Luckily Leicester could see how happy he was at Elland Road and let us extend his loan until January.

Max has said himself he's very happy at the club, playing regularly, getting himself the odd goal and with a team top of the league and playing with confidence. It's a side most players would want to be with.

And with Leicester flying high in the championship following their promotion last season, there could be a better chance of a permanent signing as Gradel was nowhere near the first team before his loan move.

But right now i can't see it happening unfortunately, the foxes were stupid enough to let Paddy Kisnorbo go on a free to us, i can't see them making that mistake twice. But by 'eck i hope they do!