Photographers kicked out and decide to stay out!

Share All sharing options for: Photographers kicked out and decide to stay out!

It seems a new row between Ken Bates and the rest of the world starts. 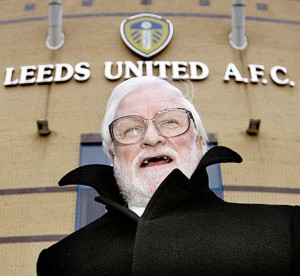 Basically Mr Bates in his infinite wisdom has BANNED all photographers from Elland Road bar two. One of which is based at Elland Road.

It's not fully known why this is, but the PA have now imposed a ban on any photography involving Leeds United players in any of their publications.

And any Leeds away games which has pictures will only use Leeds players as background rather than prominent in the pictures.

A shocking and shameful situation. As a freelance journalist, this situation is saddening because of the exposure Leeds will miss out on. PA is one of the top news outlets producing articles, radio and pictures.

Most national papers and magazines use their images and so if we won the title and/or JPT, no celebratory pictures would be shown in the papers. And this for me is truly disappointing.

How long have we waited to be recognised nationally for our achievements rather than our failings. And thanks to dear chairman, our praise for any future events will be confined to a few lines a few pages back in the sport section of the papers.

One rumour is that we want to control any image of Leeds United that is shown in the press. Its not like the papparazzi though is it?! They're players on a pitch what could they possible want to control?

Look out Bradley Johnson slipped in a puddle, that could make us look stupid. Oh no Jermaine Beckford tripped over his shoe laces, we could lose a generation of fans. Oh christ Jonny Howson has slapped a player with a aubergine, this could make us look bad!

Unless our player decide to happy slap the opposition on the pitch, why should we control the images of players on the pitch. They're playing football!

But woe is me, it seems it's because Bates wants any pictures to have advertising hoardings from the ground to be seen in the images to appease their sponsors.

Ignoring the fact that the players themselves are becoming glorified sandwich boards anyway, does any sponsor of advertising within the ground realistically think they're going to get their sign in any of the pictures?

Of course they don't, they never have and at no other club has anyone ever complained. Because they know that theres thousands inside the ground viewing it, theres huge banners outside the ground which people can see even if they don't go to the game.

So why his this become a problem now? For decades advertisers have happily paid money to get their banners seen inside the ground and out, no-one has ever publically said anything, it's just happened.

Part and parcel of the modern game, and to be honest, if they're so insistent of having their banner shown in a match day photograph and jepordizing the clubs publicity on a national an international basis, they're not worth dealing with. It's about the club, it's about helping Leeds United first and foremost.

We're one step away from tattooing adverts on players heads, you can see them in the pictures then. Casper Ankergren with Durex on his head, Luciano Becchio with L'Oreal spread across his cheeks and aquafresh ingrained on his teeth.

This can only damage Leeds United with the press. It seemed after recent fine displays in the league and against Liverpool in the cup, we started to win them over for the first time in years.

A young manager everyone is excited about almost outwitting one of europes top managers in Benitez. A brand of football that gets results, with exciting players like Robert Snodgrass having £7m left backs 'on toast' and a squad of players to be proud of.

Shame no-one will get to see those fine players celebrating wins and showing their passion now. We'll just give way to Wayne Rooney and Frank Lampard and let millions across the country see their ugly mugs and worship them.

Whilst those hard working players and manager who work tirelessly to give us a team that we can finally be proud of without being arrogant or cocky about it, are just ignored and forgotten.