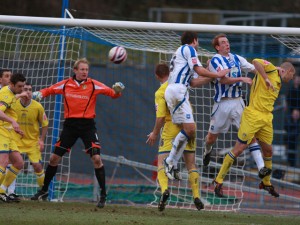 Leeds returned to the winning column with a workman-like 2-0 victory over Brighton and Hove Albion. With the victory, Leeds maintains pace in the promotion race and stands ninth in the table with thirty-nine points and looks ahead to a massive showdown next weekend against Peterborough at Elland Road.

The match certainly demonstrated a more disciplined Leeds tactically and although it may they have lacked the same attacking spirit it however is warranted given Simon Grayson's new additions. Leeds missed a golden opportunity to take the lead eleven minutes after the start when Luciano Becchio was not able to convert from the spot. From there opportunities were minimal and for the most part a box to box affair with Leeds new defending prowess of Richard Naylor and Carl Dickinson controlling threats. On the hour mark, in a highly professional exercise, Richard Naylor's free-kick was edged on by Argentine maestro Luciano Becchio to Lee Trundle, who subsequently sent the ball into the net from nine meters. Without allow the Seagulls an opportunity to level the match, Fabian Delph took that match into his own hands with eight minutes left with a dazzling forty-plus meter run followed by a resounding finish into the net.

Leeds returns to action next Saturday against Peterborough at Elland Road.

Comment: I would also like With thanks to the Brighton and Hove Albion team web-site for providing a large selection of photos available from the match.