Share All sharing options for: Leeds prevails over Hereford

The story of the match isn't necessarily Leeds 1-0 victory over Hereford but the Elland Roads visitors formidable defense. Leeds was in control of the flow of the match from start to finish and consistently pressured Hereford 'keeper Darren Randolph but somehow they held Leeds back till the seventy-second minute when Andy Robinson snapped up a rebound off a Luciano Becchio header. The visitors had a chance to level the match with a minute left in time but Moses Ashikodi shot went wide. Regardless of the outcome, the man-of-the-match was unquestionably Darren Randolph who stopped twenty-one Leeds attempts.

With Oldham and Huddersfield drawing level today, Leeds now finds itself in third, one point behind Scunthorpe and Oldham who are tied for first. 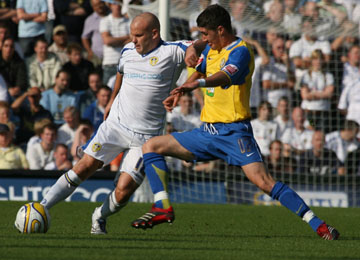