As the campaign heads into week five, the class of the league, Leicester City, Oldham and Carlisle are pulling away from the pack. They have continuously shown a complete style of play on both ends of the pitch, particularly Leicester and are far beyond what Leeds have shown so far.

Leeds certainly is a peculiar mix so-far. A stunning blend of offensive talent that is playing too safe but prone to defensive lapses. Think of that for a moment, let it stew in your hopes of a return to the Championship and ultimately the Premier League. Leeds with all its offensive power is playing too far back on its heels and not attacking, allowing the opposition to come at them and when they do, lack the composure to properly defend.

Leeds started the same squad as Crystal Palace excluding Paul Telfer and Aidan White. I can understand pushing the sixteen year-old Aidan White from the match but still four matches into the campaign I cannot understand the decision to keep Paul Telfer off the starting grid. He is a high-level player, with extraordinary experience and without question the class of the back-line. Yet every week, he sits and every week Leeds fall victim to poor defending. Defensive structure will dictate your oppositions attack and thus has a controlling the influence on match.

Leeds started the match fast as Fabian Delph set-up Jermaine Beckford whose shot deflected off Bristol Rovers defender Steve Elliott into the net at the five minute mark. Leeds continued to be the aggressor although play (and fitness of some) was too slow to seriously threaten. At the thirty-second minute a dreary long-ball over Leeds backline, left Ricky Lambert in alone, which he neatly converted. Five minutes later, the visitors doubled the scoreline off a set-piece when a completely unmarked Darryl Duffy scored from the far post.

After the break Leeds continued to dictate play but were unable to capitalize. Twenty minutes into the half, Leeds changed tactics with three strikers up-front bringing in Enoch Showunmi and Jonny Howson. A Bristol defensive error of its own left Jermaine Beckford alone to poach a goal and bring the match level at two.

Tactical changes are needed but more importantly the mind-set of the club needs to be more confident with an attacking instinct. Fabian Delph, Paul Telfer, Jonny Howson and Robert Snodgrass need to be in the starting grid within either a 4-3-3 or preferably 4-4-2 "diamond." Commit to the attack Leeds, you have the talent to do this. 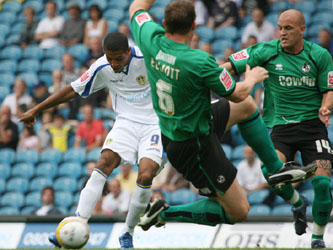