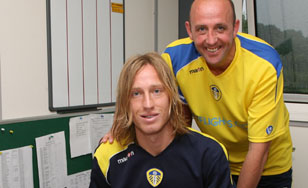 Paul Fletcher of the BBC recently put out a fine article on Leeds, "Will Leeds march on to promotion?" that is definitely something you don't want to miss out on. As the news came out of Luciano Becchio's signing to a Leeds United contract, I immediately knew how this crisply fit in his story and the clubs history, not simply as an additional Striker for the coming season but as a benchmark signing.

I am certainly not able to predict media coverage as I leave my forecasting and analytical skills to on pitch action, so I'm not sure how his signing will be reported. Truthfully this is the biggest signing bar-none of League One this year and I can't think of a Championship signing that is in the same level as well. Luciano is a splendid Striker, rich pedigree dating back to the illustrious Boca Juniors, that if taken under the arm of Gary McAllister, can develop into one of the best strikers in the league. There will be a period of acclimation and I'd be deceiving you if the language barrier won't be a challenge but this is a superb talent who opens the door to a bright future and is part of a new beginning.