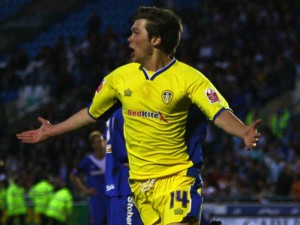 Just-turned twenty years-old on May 21st, Jonny Howson is a up and coming star with Leeds who already has provided the Elland Road faithful with much to cheer about.

Make no mistake about it, I'm a bit biased about this one because amongst all the clatter of Premier League stars we hear-of and the "prawn-sandwich" set, there is something very special of a local-boy and a hard-working product of the Academy, coming up to lead the team to victory as he did last year with a brace against Carlisle United.

Born and raised in Leeds, a self-professed Leeds United fanatic, he is living proof of the boyhood dream of a local boy becoming a star of the squad and shares stories of coming to matches with his father and grandfather. The 1.80 m (5 ft 11 in) Midfielder, who can also play Striker has shown a steady rise to his game with a creative scoring flourish. This past season, at the youthful age of 19, he wore the captain's armband against Huddersfield Town and Millwall making him the youngest captain in the rich Leeds history.

I'm expecting this just to be the tip of the iceberg of Jonny's development and look forward to a great year ahead for him.