Share All sharing options for: Jack Hobbs to Leicester City 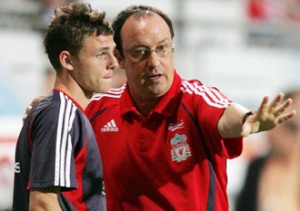 First off, I know, this is not a Leicester City blog but I feel something needed to be said as this has received very little note, too little notice and I'm annoyed. I suppose everyone in the footy world is too concerned over the debutantes and deals of epic proportions and has forgotten about the game at the core. I suppose I'm just a bit too old and curmudgeonly but I like to hear of up and coming players and support of the game at a regional level.

I know for my friends at Leicester City our encounter seems like the most unlikely of events but none-the-less it will be a hearty match against the Foxes. The subject of this post is to commend Nigel Pearson for bringing in nineteen year-old Jack Hobbs from Liverpool on-loan. I'm a trifle surprised to find this out but more surprised not to see more news of England U19 Defender heading to Leicester City. However that aside, Leicester fan's and all of us in League One will have a great treat this season in watching this splendid young player each week.

For those that do read this, it really is time to start supporting the game at its core.