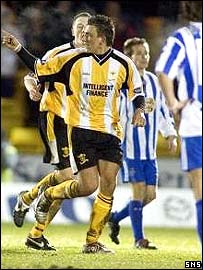 Leeds just announced the signing to Livingstone's top shelf Striker, Robert Snodgrass to a three-year contract. Young Mr. Snodgrass had been highly sought after by a wide selection of top-flight clubs after putting ten goals into the net for the Scottish First Division club. In-fact I expected to see him in the SPL this season and quite obviously Gary McAllister is making use of his vast contacts. In coming to Elland Road, he commented that "this move is a dream come true." He will join the squad immediately and I expect to see him to be in the thick of the battle shortly.

Gary McAllister is still searching for another Striker, presumably a more experienced one that can see them through the pressure packed days of promotion but this is getting quite close to an spilling-over and running the risk of players edgy for more playing time. How this signing impacts Argentine Luciano Becchio is hard to say, although quite honestly I expect a number of other clubs to waiting in-line if any contract falls through with him. There are already significant rumours of him finding his way down to QPR (before they make their way into the Premier League next season) or Derby County which would see him re-unite with Huracán alumni Emanuel Villa. Hmm...why be coy about this my friends, if he doesn't sign with Leeds, I'm expecting just shy of a parade for Luciano at Derby (although, a parade would be nice).