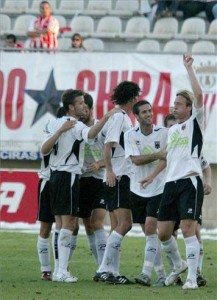 Gary McAllister is definitely pulling out all stops and calling-in a few markers because somehow tomorrows friendly against Shelbourne in Ireland will see the debut of twenty-four old Striker Luciano Becchio.

Luciano has been signed to a trial basis and hails from Argentina where he started in the renowned Boca Juniors youth program and then stints with Barcelona and Mallorca. He spent the last campaign at Mérida UD of Mérida, Spain where he drove twenty eight goals into the net. It was also revealed that Luciano will be returning to Leeds with the club for their friendly against Barnet on Saturday. While there will naturally be a period of adjustment, his style of play and attacking ability would be an extraordinary asset to the club. Hopefully the young Striker who started in La Bombonera will find himself as part of Elland Road this season.