good use of friendly in Bray

Share All sharing options for: good use of friendly in Bray 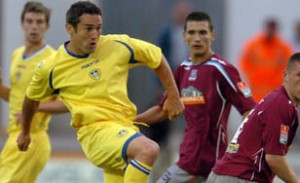 It's important to understand that Leeds 3-2 victory over the Bray Wanderers wasn't indicative of the important plan Gary McAllister put into place for this match. Using it strategically as a chance to field a completely different squad than the Galway encounter against the rock-solid Irish club made a lot of sense as it provided the opportunity to see a number of players, typically used as substitutes, in a more challenging environment.

In the recent Galway match-up we saw a squad that certainly could be our opening lineup as the campaign kicks off against Scunthorpe United. The changes with the squad for Bray were substantial, with David Lucas getting a rare start at 'keeper and a back four with Slovakian international Ľubomír Michalík, Rui Marques and the two very promising twenty year-olds Ben Parker and Scott Gardner. The midfield boasted David Prutton, Jonathan Douglas, Bradley Johnson and Peter Sweeney with the on-trial Canadian Marcus Haber and Andy Robinson at Striker.

Bray got out to a fast start, taking a 2-0 lead at the half best described by Gary McAllister as "disappointing" he though Leeds controlled much of the play. While David Prutton, Peter Sweeney and Andy Robinson showed creativity and flourish, they were unable to capitalize on good scoring opportunities yet much of this has to do with players unfamiliar with each other on the pitch. The second-half was completely different with Rui Marques (55) scoring off a set-piece, the Canadian Marcus Haber (68) bringing the match level and Jonny Howson coming off the bench to score the winning goal at the eighty-third minute.

Of particular note with this lineup, both Ľubomír Michalík and Peter Sweeney our hot commodities on the radar maps of many Championship squads so don't be surprised with them appearing on the transfer wire. Depth will need to be built in these areas to anticipate this.