Share All sharing options for: good performance in Galway 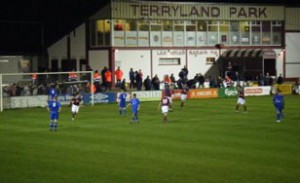 I have to say, I've been hopeful we'd see a closer look to the full team and I think tonight's effort was more like it. Ignoring the 2 - nil scoreline over Galway United, I was expecting Gary McAllister to continue the approach of fielding two separate units each half and make this more of the friendliest of friendlies. However I was surprised and quite pleased to be honest, to see him go with a squad we could see kick-off the campaign.

To no surprise League One player of the year, Jermaine Beckford brace (25, 46) led our boys but the real storyline and maybe I'm showing my colours a bit too clear, was the forever young Scot Paul Telfer being handed the start and from all accounts, showing that he's a special breed. The cagey defender who will turn thirty-seven this October played a full seventy-four minutes and was called upon numerous times and each time, turned Galway attackers away. Clearly his retirement is premature and hopefully this trial will turn into something more permanent. His watchful eyes and keen leadership are deeply needed if we are to push the title race and promotion.

Of other particular note was the U21 Canadian international Marcus Haber, who is on trial with the club, coming on for Becks at the sixty-second minute. He showed himself well for the club with competent touches and vision, even in the latter stages of the match.

A very solid performance in the long-road of the season!