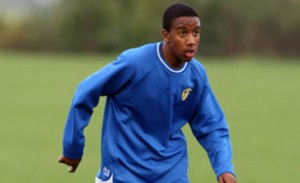 As England’s U19 squad heads into the elite round of the European championships and with Leeds Fabian Delph occupying a important role in the midfield, now is perfect time to introduce this superb young up and comer.

Fabian, who hails from nearby Bradford, came aboard Leeds in 2006 and has been making fast strides in his development and shown the maturity and poise to wear the armband for the Reserve squad. This past spring his efforts were rewarded as he was called-up for England U19 in their match against Russia and he continues his presence with the Brian Eastick-led squad in the final stage of the tournament. Though he just turned seventeen this past May, he has shown Leeds a creative flair in attack and leadership well beyond his years as well as superb athleticism, proving his potential is limitless. In keeping with Gary McAllister tremendous support of the Academy and the long tradition of Leeds development of great domestic talent, Fabian will have the opportunity to crack into first team and judging from his previous appearances and intense focus, you can safely assume to see a great deal of him this season.

For all Leeds supporters, please check back as I will be posting relevant match reviews of England U19 efforts and keep everyone abreast of Fabian.