Share All sharing options for: solid start at York City 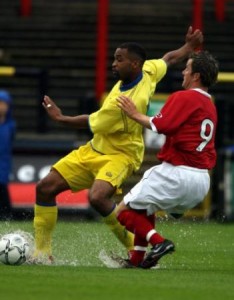 It was a solid start to the pres-eason with the club facing York City at Bootham ("KitKat") Crescent. With a hearty crowd of nearly 4,500 attending and many of the Leeds faithful making the trip, the match ended in a noble 1-1 draw, precisely satisfying the goals set by Gary McAllister. Promising to use two separate squads for each half and make sure everyone had a full forty-five minute run-out, Leeds was additionally able to experiment with different combinations, debut Enoch Showunmi and Andy Robinson, as well as provide some of the younger players, such as seventeen year-old Tom Elliott a chance to see some action and even get Neil Kilkenny on the pitch before he heads off to represent Australia in the Olympics. Throughout much of match, the squad displayed a solid offensive assault and a capable defense. The one issue was that Midfield Bradley Johnson suffered a knee injury of an undetermined severity but did return to the match. The lineups for the respective halves were as such:

After a number of scoring opportunities Jermaine Beckford, as you may have guessed, slotted home the first goal off a Andrew Hughes cross at the twentieth-fifth minute. The home fans were rewarded with Onome Sodje goal before the half to bring the match to its final score of a 1-1 draw.