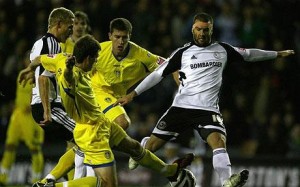 With a good crowd at Pride Park, Leeds put together a brilliant performance but fell short in a 2-1 loss to Derby County in the League Cup. After giving Derby a head-start with two goals in the first seventeen minutes, Gary McAllister's forces fought admirably drawing a goal back with the brilliance of Luciano Becchio once again rising to occasion and the promise of tomorrow in the form of Fabian Delph leading the way. Whilst the loss of moving into the final eight of the League Cup is a disappointment, the tide has turned for Leeds and its academy is the force pushing it back up. While League One doesn't get the attention it deserves, it is a brilliant statement when a club returns to form through its development of its core academy system. This alone is a sense of pride far beyond wins and losses.

Derby took the lead with Emanuel Villa's goal only six minutes into the match but Leeds fought back with Luciano's attempt two minutes later being pushed above cross-bar by Derby 'keeper Roy Carroll. However at the seventeenth minute Polish international Przemysław Kaźmierczak and Kris Commons played a smooth one-two, with the ball then played to a wide open Nathan Ellington to tuck into the back of the net. Five minutes before the break Frazer Richardson struck a perfectly placed cross into the box that Luciano sublimely headed into the net. With the goal, Leeds confidence grew to a level I haven't seen in an extremely long time and they dominated the pitch thereafter. Finally four minutes after the hour the lineup I have waited to see was on the pitch as Jermaine Beckford was introduced. With Jermaine, Luciano and the young Scot Robert Snodgrass up-front. The attacking trident didn't disappoint, continued to create opportunities and although they were unable to level the match put forth a brilliant effort that should etch their names into the formation.

After the match Gary McAllister noted of the teams resolve after falling down 2-0:

''I didn't fear the worst at 2-0 down. I think when you are in trouble you have got to show bravery. Bravery is not clenching fists and banging into people, it is about getting your players on the ball and going into tight areas to receive the ball. We did that and we reverted to form. At 2-0 down we went back to what we do best and that is trying to keep the ball and work our way back into the game. That is what impressed me and pleased me the most - our response at 2-0 down.''

While the loss is a bitter pill for the Leeds faithful it was their finest performance of the year and a point of demarcation. The performance was worthy of club of a higher level and if they can take this intensity and reapply it, their will be no doubt.