Share All sharing options for: Gary McAllister states the obvious 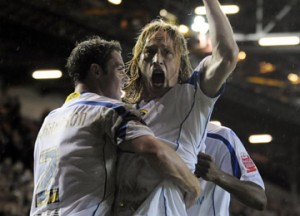 As the topic turned to Luciano Becchio, who clearly is the best signing of the season in League One if not the Championship, he noted:

"I thought the way he led the line tonight was excellent."

"He wins his fair share of headers, he takes a lot of hammer, and I think he just generally links the team up pretty well.

"The way he gets the ball into feet and brings others into the game is very pleasing for me because that's what we bought him for.

"He's taken a bit of the heat off Jermaine up the front and I thought he was a handful tonight.

"If we get some decent balls into the box then I'm sure he'll get his fair share as well."

While each of these statements are absolutely correct they avoid the issue that Luciano is capable of much more if Leeds adapts to a 4-4-2 "diamond" with him as the "enganche" with Robert Snodgrass and Jermaine Beckford upfront. The wings could be amiably filled with Fabian Delph and Jonny Howson / Andrew Hughes / Andy Robinson and utilize the crafty Jonathan Douglas in more of a holding position. This approach would not only put Leeds in their most advantageous position but emphasize their strong points and the oppositions weakness against a driving attack. Emphasis must be place on the attack as Leeds has a horrible habit of slowing to a snails pace and trying to smash and grab goals.

Yet one of the biggest problems are defender for which Gary McAllister added:

"We did create chances but there's a little bit of a concern over the chances we gave up at the other end."

"It was sometimes being done on the counter and lapses of concentration, and we've got to eradicate that."

This is straight to the point as without Paul Telfer in the line-up the Leeds back-line has been its own worst enemies with poor fundamentals and a professional level of focus. Aiden White has been a great revelation this campaign and in-truth one of the best defenders at the tender age of sixteen.

To earn promotion to the Championship, Leeds must address these situations without further delay.