Share All sharing options for: Leeds over Leyton Orient on Luciano Becchio's goal 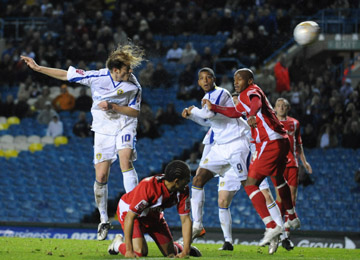 Leeds defeated Leyton Orient 2-1 in a peculiar match where they controlled play but had significant finishing problems. Jermaine Beckford had a particular troubling evening, missing a penalty eleven minutes into the match as well as clanging three shots off the woodwork.

The O's took the lead when Dean Morgan struck from the right channel nine minutes before the break only to have the match draw level with a Stephen Purches own-goal. Just before the break Luciano Becchio headed-in a Frazer Richardson cross to give Leeds the 2-1 lead and the eventual victory.

The victory sends Leeds to fourth place, three points behind Scunthorpe and Millwall locked in a tie for first. Leeds returns to action as Walsall visits Elland Road.