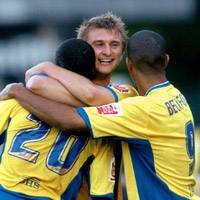 Before we start, let's all pre-emptively welcome Bolton Wanderers to the Championship - with a manager like Gary Megson, they'll be lucky to avoid League One.

Anyway - onto the match. Apologies for posting so late in the week, but I only just got access to video. Unfortunately, I can't post any highlights, because it's only available through a subscription to Leeds United's official website. Blame Ken Bates - I know I do.

Brighton were always going to be tough, but I don't think anyone expected a game as tight as this one. Despite going unbeaten in 12 games, Leeds's form has been inconsistent, with the midfield in particular unable to dictate the pace of play against competent opponents. That was bourne out in last weekend's fixture against a solid Brighton team, which Leeds managed to win 1-0 despite being the second-best team on the pitch for most of the afternoon.

The first half was uneventful, livened up, if only briefly, by Jermaine Beckford's yellow card for a sloppy collision with Brighton goalkeeper Michael Kuipers. Neither side managed many shots on goal at all during the match, but Brighton generally looked the more dangerous side. Leeds's defence has been one of the team's best features all season, and today was no exception - the ability of a team to grind out goals and defend stubbornly even when out of form is a hallmark of a winning side, and despite Leeds's second-rate performance in this match, it gives me considerable optimism for the rest of the season.

Tresor Kandol's 78th minute match-winner - scored from all of 6 inches after a rubbish bit of defending from Brighton's Adam El-Abd needlessly turned a harmless Frazer Richardson cross into an easy Leeds goal  - might have been a little bit underwhelming, but it did the job, and should help us all forget about his horrifically botched penalty against Leyton Orient. He and Jermaine Beckford had a difficult game in the face of one of the better defences in League One, and in all honesty, that he scored at all was more a matter of luck than of skill. In the 77th minute, I'd probably have put money on a 0-0 draw, a result which was the least Brighton had earned. 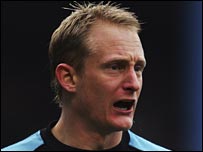 leeds.theoffside.com Man of the Match: Kasper Ankergren. Well on the way to earning another League One Player of the Month accolade, Ankergren managed more than one tricky save to keep Leeds ahead in a game that could very easily have gone Brighton's way. He narrowly beats out Brighton's Adam El-Abd, without whom - let's be honest here - Tresor Kandol would never have scored the matchwinner.

The Team: Pretty much exactly as I predicted in my Match Preview last week, and with only one change from the last match against Leyton Orient. Ankergren in goal, Richardson, Heath, Marques, and Clapham in defence. Prutton, Hughes, Douglas, and the always excellent Carole formed the Leeds midfield, whilst Beckford and Kandol teamed up in the attack. On the bench were Westlake, De Vries, Huntington, Lucas, and Andrews. Still no sign of Felipe Da Costa, although I can still hope.

Bookings: Beckford and Marques both received yellow cards, as did Brighton's Whing.

This Saturday: Leeds face Milwall at Elland Road. Should be a difficult game, despite Leeds's home advantage, and since the teams each have some of the worst records in English football for fan violence, expect fireworks. Full match preview tomorrow.